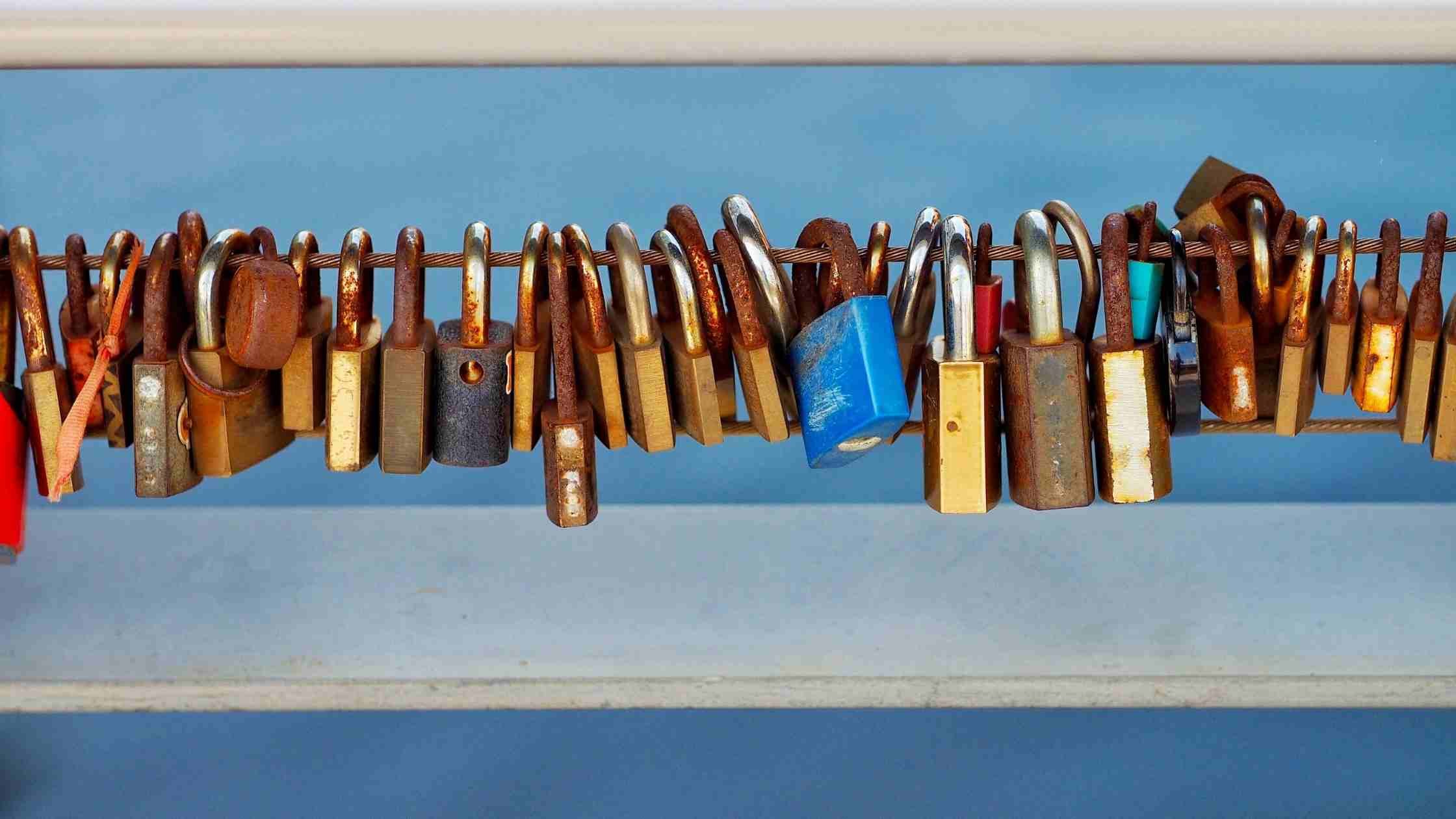 Mobile apps commonly use APIs to interact with backend services and information. In 2016, time spent in mobile apps grew an impressive 69% year to year, reinforcing most companies' mobile-first strategies, while also providing fresh and attractive targets for cybercriminals. As an API provider, protecting your business assets against information scraping, malicious activity, and denial of service attacks is critical in maintaining a reputable brand and maximizing profits.

Properly used, API keys, tokens, and authorization play an important role in application security, efficiency, and usage tracking. Previously, In Part 1, we began discussing mobile security with a very simple example of API key usage and iteratively enhanced its API protection. In Part 2, we moved from keys to JWT tokens within several OAuth2 scenarios, eventually removing any user credentials and static secrets stored within the client. In Part 3, we discuss several attacks on OAuth2 authorization grant flows and common mitigations for them. We finish by extending the authorization mediator pattern introduced in Part 2 to offer best practice security, while adapting to less secure Oauth2 implementations. 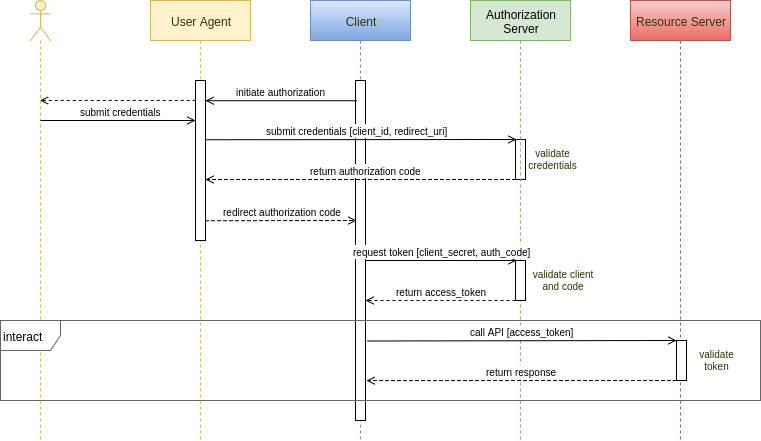 OAuth2 had a rather drawn out specification phase, and as a result, implementations vary between different service providers. Some optional features and newer extensions, which we'll describe below, have become important in preventing attacks which exploit the authorization grant flow.

For all scenarios, we assume that TLS techniques discussed in Part 1 are used to keep the communications channels secure.

I Know Your Secret

Consider a straightforward authorization grant implementation. It relies on a client id, client secret, and, optionally, a fixed set of redirect URIs shared between client, authorization server, and resource server. As these are all static values within the client app, they cannot be considered secure. If an attacker reverse engineers these values, it is a simple matter to construct a fake app which looks both cosmetically genuine and which appears perfectly authentic to the OAuth2 authorization grant flow. As There's a Fake App for That suggests, there are plenty of these apps causing mischief in the app stores.

In Part 2, we discussed removing the client secret and replacing it with a dynamic attestation service. 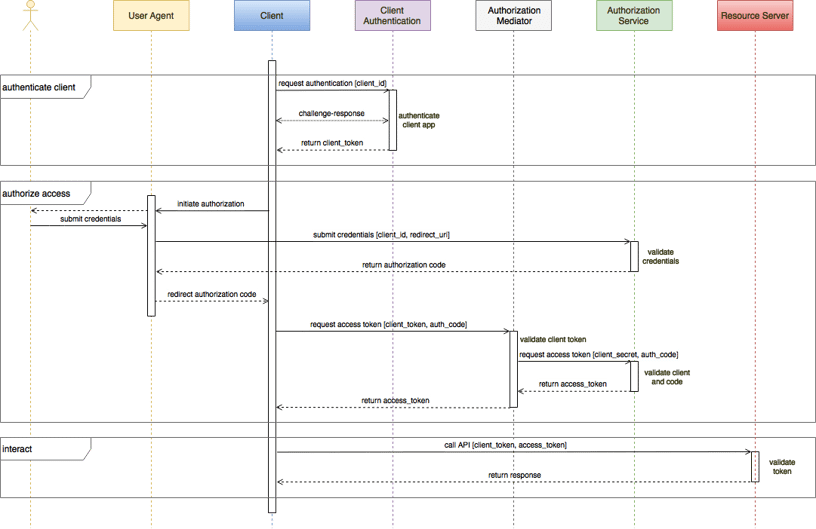 A dynamic attestation service, such as Approov, provides extremely reliable positive authentication of untampered apps. Being dynamic, this service authenticates the app during both phases of the authorization grant flow as well as frequently during authorized operation. As a result and without relying on client secrets, every authorized API call is made by an authentic app for an authorized user.

I See Your Auth Code

With optional or exploitable static secrets, a malicious app could successfully convert the redirected authorization code into access and refresh tokens and start accessing the resource server. Imagine launching a real banking app, granting your permissions, presenting login credentials, and then wondering why your app seems stuck. While you are waiting, your authorization code has been stolen, and a malicious app is making API calls to empty your bank account.

To mitigate authorization code interception scenarios, the Proof Key for Code Exchange (PKCE) extension was added as a requirement for OAuth2 public clients.

Though the plain code challenge method is the default, it is really only for backward compatibility with initial implementations. The plain method fails if the attacker can observe the initial client request, which includes the code verifier in the clear.

An alternative and preferred challenge method is "S256". With S256, the code challenge is a base 64 encoding of the SHA2 256 bit hash of the code verifier plain text.

Since the SHA2 transformation is practically irreversible, even if the code challenge is observed by the attacker, he cannot provide the original plain text code verifier required to obtain the access code.

It is possible that the malicious app could store the hijacked code and try to use it later or even pass the authorization code off device. Since it can only convert the authorization code to an access token from an attested client, it must take control of that client somehow and is limited to normal API call sequences through that client. Authorization code expiration times, device fingerprinting, and replay defenses can be added to frustrate these attacks.

We introduced an authorization mediator in Part 2 to adapt the authorization grant flow to use a dynamic attestation service. This moved the vulnerable shared secret off the client and provided a reliable positive authentication approach without requiring any changes to the existing OAuth2 authorization service.

One of the challenges we alluded to earlier was the variety of inconsistent OAuth2 service implementations. Each service may ignore some required elements and/or require some optional ones. Implementations may also add some capabilities, like PKCE, over time.

If you want to directly interface with an authorization service, you are bound to whatever security policy it implements. As native apps are public, a "lite" implementation could be very insecure.

If you want to directly interface with multiple authorization services, then your client authorization library/SDK will grow and become difficult to manage. Any policy changes will require app updates.

Service policy upgrades and additional service providers can be added at the mediator without requiring client upgrades.

Using this approach, we are able to protect every API call made to our resource servers validating both user and app authenticity, independent of the capabilities of the authorization service used.

In Part 1, we demonstrated use of client secrets and basic user authentication to protect API usage. In Part 2, we introduced JWT tokens and described several OAuth2 user authentication schemes. On mobile devices, static secrets are problematic, so we replaced static secrets with dynamic client authentication, again using JWT tokens. Combining both user and app authentication services provides a robust defense against API abuse. In Part 3, we discussed a few threat scenarios and extended the authorization mediator to provide strong authorization regardless of the strength of the supported OAuth2 providers.