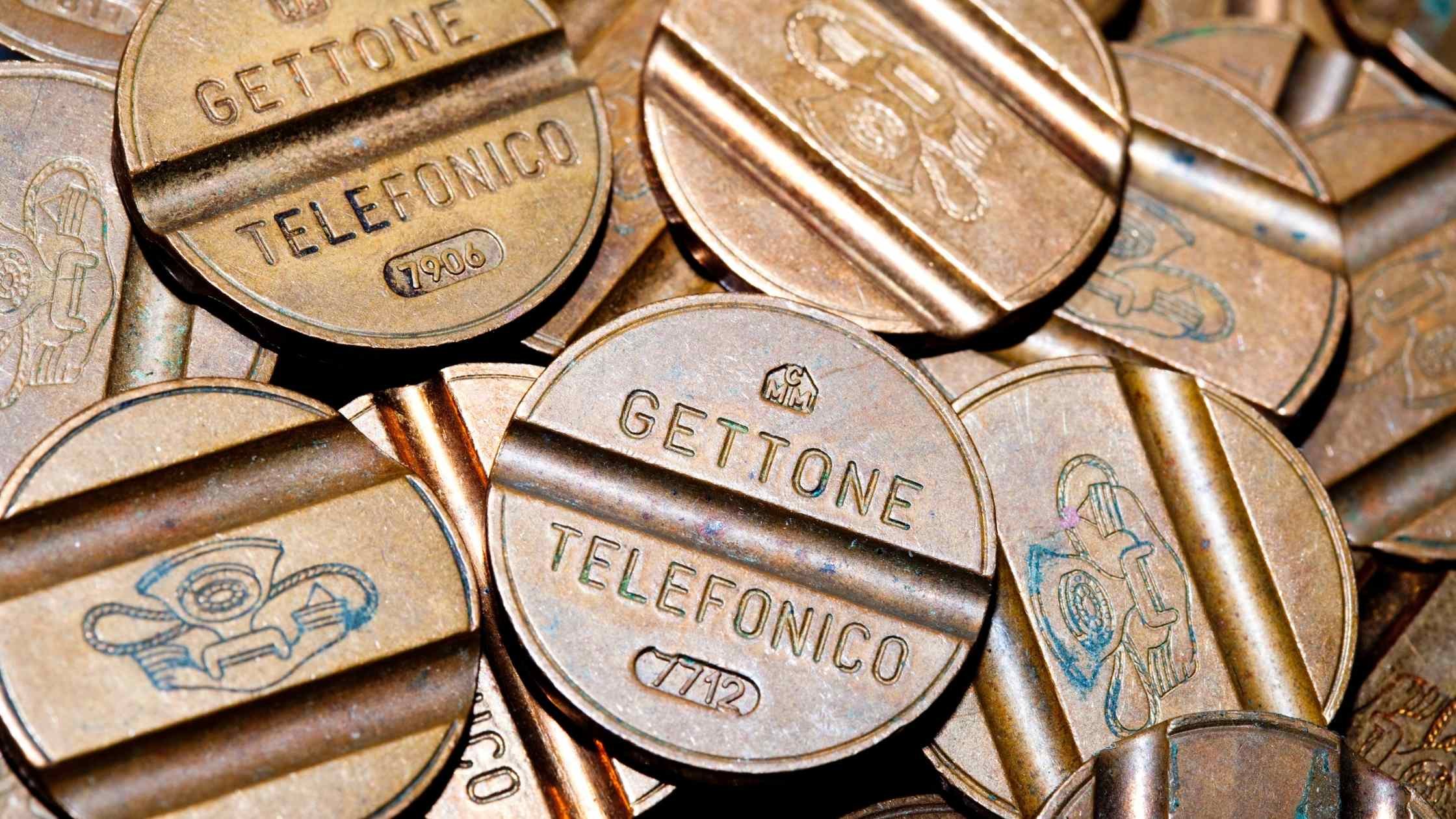 Mobile apps commonly use APIs to interact with backend services and information. In 2016, time spent in mobile apps grew an impressive 69% year to year, reinforcing most companies' mobile-first strategies, while also providing fresh and attractive targets for cybercriminals. As an API provider, protecting your business assets against information scraping, malicious activity, and denial of service attacks is critical in maintaining a reputable brand and maximizing profits.

Previously, In Part 1, we began with a very simple example of API key usage and iteratively enhanced its API protection. In Part 2, we move from keys to JWT tokens within several OAuth2 scenarios, and in our final implementation, we remove any user credentials and static secrets stored within the client and, even if a token is somehow compromised, we can minimize exposure to a single API call.

Where We Left Off

For all scenarios to follow, we assume that TLS techniques discussed in Part 1 are used to keep the communications channel secure.

Switch to an Authorization Token

OAuth2 has become a popular way to authorize user access to protected resources. The OAuth2 authorization framework defines several authorization grant flows. Though most service providers follow the spirit of the specifications, they often choose to implement just a part of the full specifications or sometimes implement capabilities differently than specified. 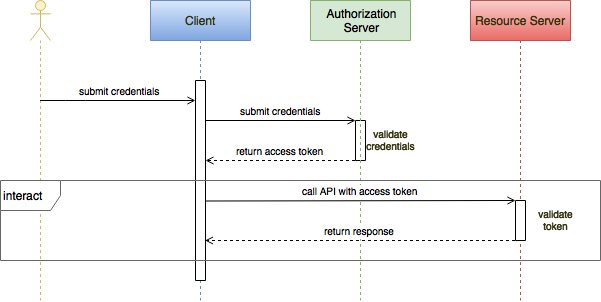 Where an access token differs from a session key is in how the token is interpreted. JSON Web Tokens (JWT) are a secure, URL-safe method for representing claims and are often used as OAuth2 access tokens. The JWT.io site provides a convenient place to experiment with tokens. 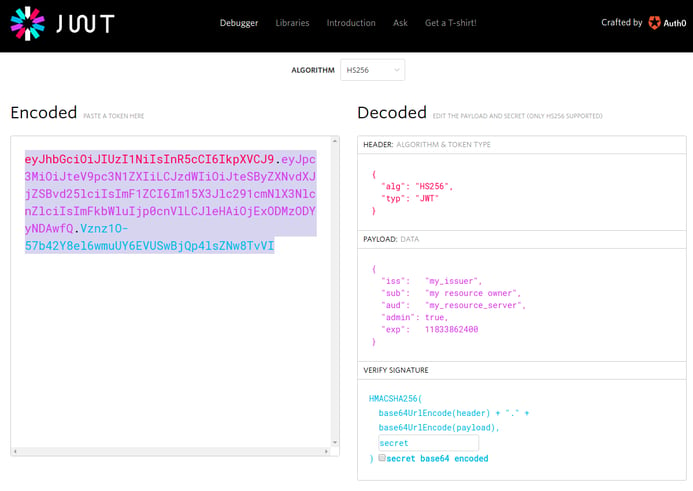 A JWT contains a JSON formatted payload describing a set of claims. Common claims include:

The access token is also called a bearer token and is passed with every API call, typically as an HTTP request header:

There are different ways that the token can be validated by the resource server. One common approach is to sign the JWT token using a secret known to the both the resource server and the authorizing service, which in this case is the resource server itself. An attacker cannot modify a token's claims without invalidating the signature. The client can read the claims if necessary, but it does not know the secret, so it cannot verify the token itself. Neither the user credentials nor the signing secret are stored on the client, so they cannot be extracted through reverse engineering the application.

The server can validate the signature and check that the claims have not expired. With basic access authentication, the session key is used to retrieve state stored in the back end. If there are multiple servers which can service a request, then accessing this state and synchronizing it between servers can be a performance bottleneck. With access tokens, authorization state, such as the subject, is stored on the client, and that state is provided with every call. If the client maintains and provides the equivalent of all session state with every call, then the API protocol is stateless, and any server is free to handle a request independently of other servers, greatly improving system scalability.

Since the signing secret is not stored on the client, the secret can be changed on the server without requiring changes to the client. Access tokens are valid until they expire, so if the expiration window is long, a stolen token could be used successfully by an attacker for quite a while. If suspicious behavior is suspected, a token can be blacklisted on a group of servers. A revoked token will fail validation, triggering a new password credential sequence for the resource owner. 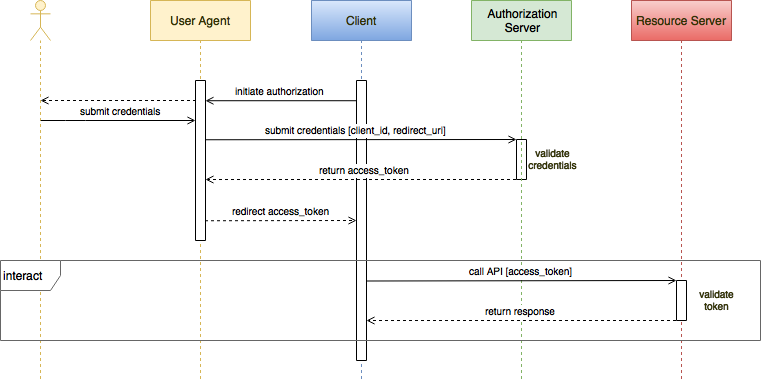 Implicit grant type Flow User sent via redirect to the auth provider's web site, user submits credentials, auth provider verifies them for your app, then the provider redirects back to your web application. The access token is directly passed in the URL #hash and can be extracted with a little JavaScript code. As the client is not able to keep a secret, there is none (no client_secret). Also, there is no such thing as refresh tokens, the client web app will have to ask for a new token.

Access tokens passed from client to resource server can be verified by the resource server using the same secret used to sign them. Both authorization and resource servers share this secret, but this secret is never exposed to the client or user agent. A separate system administrates user credentials, client ids, resource access scope, and shared secrets.

This grant type is considered implicit because the resource server implicitly trusts that the requester submitting the access token is the client. This can be a risky assumption. For example, if an attacker can compromise the user-agent, the attacker may be able to view the access token and subsequently use the token to make valid but malicious API calls.

Authenticate the App, Not Just the User 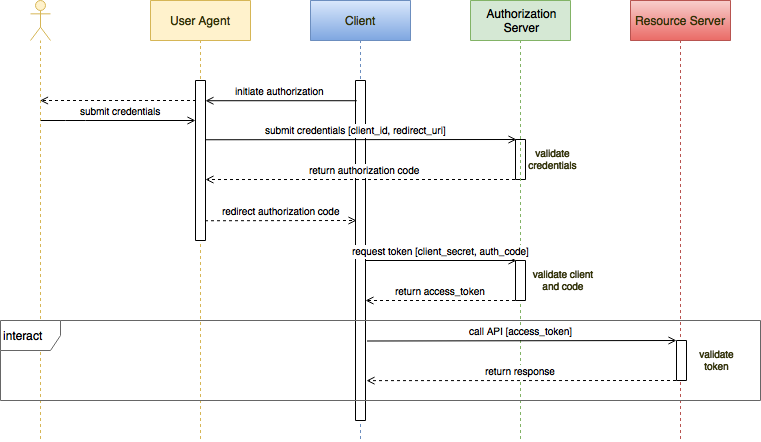 As we know from Part 1, a static secret stored on the client is hard to hide from a determined attacker. We will discuss how to remove static secrets from the client shortly.

The OAuth2 spec does not require client app authentication beyond the authorization flow, but ideally both user access, through the access token, and app access, through the client secret, should be sent with each API call. The resource server should validate both before allowing access to resources.

One great thing about access tokens is that they have an expiration date. If they are somehow exposed, they are only useful for a limited amount of time. Since the resource owner has to enter his credentials each time to get a token, if lifetimes are short then users will get annoyed at having to repeatedly reauthenticate. Conversely, if lifetimes are long, an exposed token can do a lot of damage before it expires. A token suspected of being stolen can be revoked, but this will not undo any damage which occurred before detection. 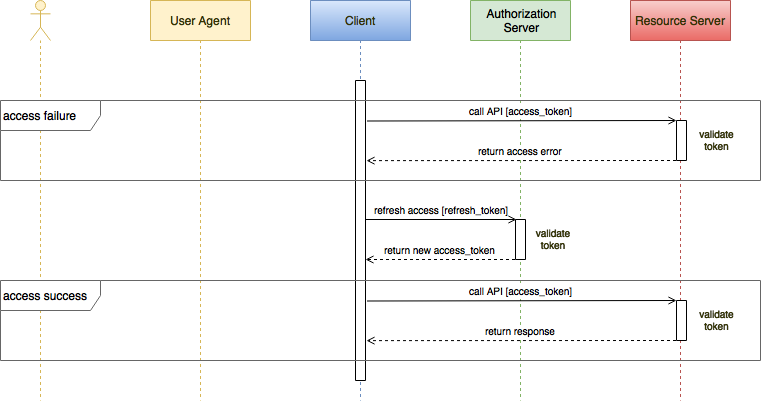 Refresh tokens have longer lifetimes than access tokens. The resource owner will not need to reauthenticate until the refresh token expires. If an access token is compromised, then its malicious use is limited to a short time. If a refresh token is compromised, it has a longer lifetime and can be used to generate additional access tokens. As such, refresh tokens are usually subject to strict storage requirements to ensure they are not leaked. They can also be blacklisted by the authorization server, which will trigger a new resource owner credentials session. I strongly recommend authenticating the client app during any refresh token operation, but this is not required by the OAuth2 spec.

With each refresh, in addition to the new access token, a new refresh token can also be sent. The old refresh token can be immediately blacklisted, or more complicated token rotation schemes can be used to frustrate the malicious use of any individual token.

The client secret should be used to authenticate the client app for:

Many people do not send the client secret with every API call, arguing that since the client was authenticated using the secret during the authorization tokens grant, it is redundant. I prefer to include it as one additional check so you authenticate that it is still the client who is using the access token.

With every API call, both the client integrity token and the oauth2 access token are sent in the request headers. The resource server is modified to validate both tokens before handling the request.

Unlike user authentication, client authentication requires no user interaction, so client integrity token lifetimes can be extremely short, and no refresh tokens are needed. 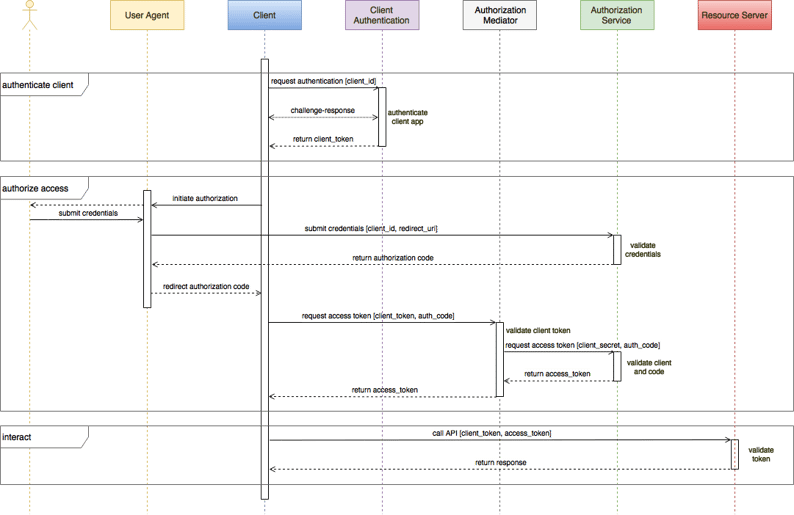 Using this approach, we are able to protect every API call made to our resource server validating both user and app authenticity, and we did it all without exposing user credentials or the client secret to the client itself.

In Part 3, we will discuss a few remaining threat scenarios in the user authentication flow.

Our first batch of business level attacks are Data Scrapers and Account Hijack. We also take a...