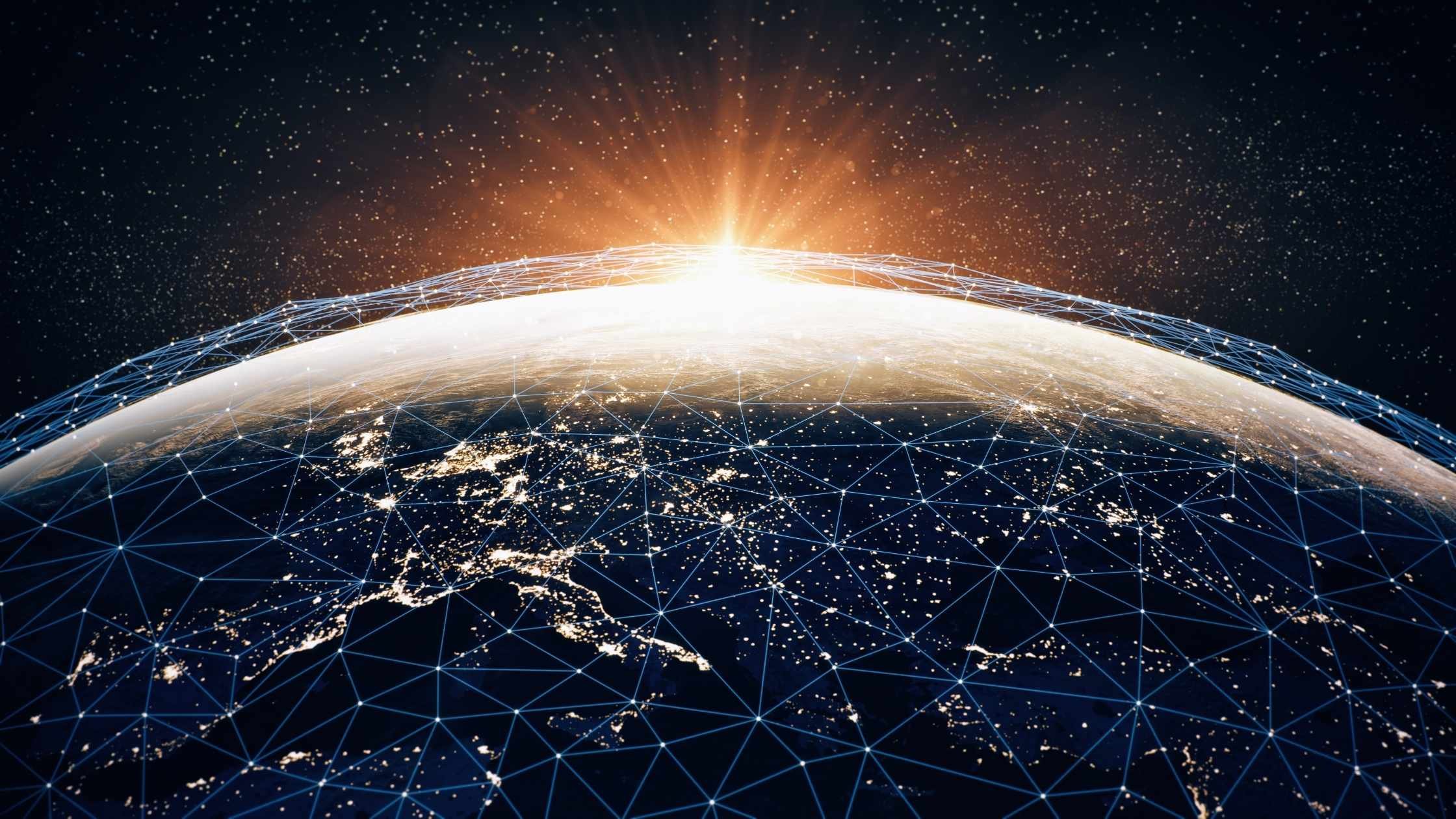 The Hands On Mobile API Security: Get Rid of Client Secrets tutorial demonstrates how to improve API security by removing vulnerable API secrets from mobile apps. In the tutorial, you work with a simple photo client which requires an API key to access NASA’s picture of the day service. An API Proxy, introduced between your client and the picture service, removes the need for storing and protecting the API key on the client itself. 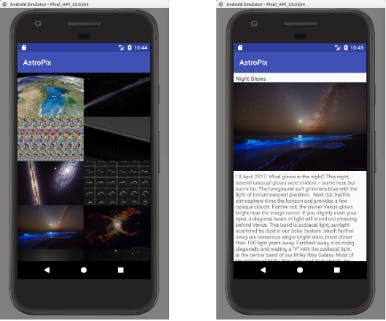 Since I expected most people to run the tutorial with the Android client in an emulator and the proxy server on localhost, I deliberately ran plain HTTP protocol between client and proxy. Though this simplified the tutorial, it’s not appropriate for a production environment. To enhance security, you would want to run HTTPS protocol with certificate pinning to protect against man in the Middle (MitM) attacks.

So in this sequel, you will generate a self-signed certificate during configuration and will modify the Android client to only accept connection requests from a server holding the certificate’s private key.

Certificate pinning establishes a white list of certificates that a client will accept. Even though a MitM attack might present a legal certificate, the client will only accept a connection that is signed by a known certificate.

To get started, download the updated Hands On API Proxy source code. In a terminal or command window, change to a directory where you will store the tutorial, and clone this public git repository:

Follow the additional set up instructions from the original tutorial.

When you run the configuration setup, it will generate a self-signed digital certificate and corresponding private key, and it will place them in the appropriate pinned client and proxy project locations.

You can build the current pen projects and confirm that the client and proxy are working as expected.

Adding HTTPS to the Localhost Proxy

To start, ensure your digital certificate and private key pair are located in the proxy’s source directory. If you are using the certificates which were generated during configuration, they are named cert.pem and key.pem respectively:

In the proxy pen, ensure that the required modules are installed:

Next, modify the node proxy to run HTTPS. Require the https package, and replace the default HTTP server’s app.listen() call with a call to create an

HTTPS server using the key pair. The modifications look like this:

Try out your proxy using a browser to call the proxy. Assuming you are running locally on port 8080, replace a direct call to NASA with the now proxied call htttps://localhost:8080/api.nasa.gov/planetary/apod?date=2017–01–01. Using chrome, I see this response:

Chrome does not rust self-signed certificates, so it warns us we are trying to run HTTPS with an untrusted certificate, If we proceed anyway using ADVANCED, we should see the correct response from the NASA server through the localhost API proxy: 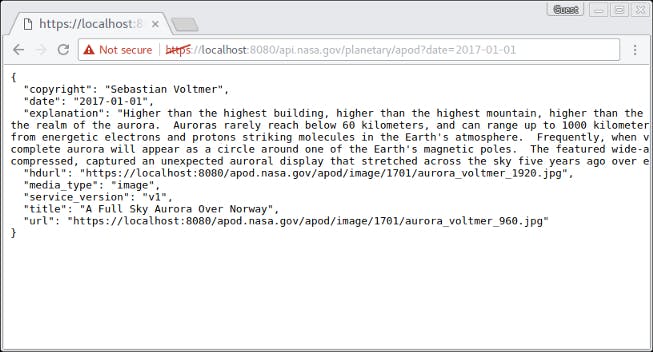 If you still do not see a valid JSON response, double check your proxy URL, network connectivity, and digital certificate. Triple check that the proxy URL specifies HTTPS protocol. Also in src/config.js, check and force the approov_enforcement value to false. Restart the proxy server, and you will see failing attestations in the proxy log, but the service will not be blocked.

To pin a connection in a production environment, you would likely use a certificate signed by a trusted CA, and that is actually the easier approach to implement. Using a self-signed certificate to pin will require a bit more work inside the client which we’ll tackle next.

For reference, a completed version of the API proxy at this stage is in steps/proxy/android/4_pinned-proxy.

In the Android client app, we want to pin the HTTPS channel to only accept a connection holding our digital certificate.

Start by changing the api_url in config.xml to use HTTPS instead of HTTP:

view rawconfig.xml hosted with ❤ by GitHub

In the pen client project, begin by adding the self-signed certificate cert.pem into the app’s main assets directory. A copy of cert.pem can be found in steps/client/android/4_pinned-client/app/src/main/assets.

In the App.java file, create a private SSLContextPinner class inside the App class which reads your digital certificate into a KeyStore which in turn initializes a new TrustManagerchain. The TrustManager chain then initializes the TLS SSLContext. Add methods to return the SSLContext and initial X509Trustmanagerfrom the chain:

view rawapp-pinner.java hosted with ❤ by GitHub

Next you must provide a host name verifier. Normally, you could compare the DNS name to the host name associated with the certificate, but with absolute IP addresses, this technique breaks down in browsers and other network stacks. Since we are pinning a known certificate in this example, we will blindly accept that the host name is valid for this tutorial. This is fine as long as no one has stolen our certificate’s matching private key, which is an acceptable risk for this tutorial; however, in production you would use a stronger check. For now, create an always true host name verifier inside the App class:

view rawapp-verifier.java hosted with ❤ by GitHub

Use these classes for certificate pinning and host name checking to build a pinned client for your self-signed certificate. Modify the App class onCreate() method:

view rawapp-client.java hosted with ❤ by GitHub

With those changes, you are ready to test the pinned connection between client and server. Ensure that the proxy server is running, Build and run the modified client app on the Android emulator or device as before. You should see a gallery of current NASA photos in the emulator and photo requests in the API proxy console log.

If you do not see photos, double check your proxy URL, network connectivity, and digital certificate. Double check the proxy IP address (normally10.0.2.2 from the Android emulator) and port address (normally set at 8080). In src/config.js, check and force the approov_enforcement value to false. Restart both proxy server and client app. On the proxy, you will see failing attestations, but the service will not be blocked.

If you want to enforce client attestation checks, you must register the modified client app with the Approov demo service as you did in the original tutorial.

For reference, a completed version of the API proxy at this stage is in steps/proxy/android/4_pinned-proxy.

Congratulations on successfully pinning a self-signed certificate. At this point, you might be asking yourself “if the purpose of the tutorial was to remove secrets from the client app, didn’t we just add a new secret to the app?”

Well, we did add a constant into the app, which was the certificate itself if using self-signing. However, the certificate is the public side of the public-private key pair. The API proxy server will give out this certificate to anyone who tries to establish a secure connection. It’s not a secret. The private key, held on the server and not on the client, is the true secret information.

What is critical is to prevent anyone from adding or replacing your certificate with their own certificate and repackaging the app. Anyone using the modified app would then be vulnerable to a MitM attack. This is where client attestation such as Approov is crucial. Any attempt to tamper with the app will result in an attestation failure.

If you haven’t done so already, I recommend ensuring the Approov demo package is current and reregistering your final pinned client-proxy pair by following the final steps of the original tutorial. This greatly strengthens your security.

Using HTTPS with pinning provides both privacy and data integrity. Pinning is an important technique to prevent man in the middle attacks, but it can be easily compromised if the client can be tampered with. In this case, it’s not a matter of hiding a secret but of ensuring that a public certificate cannot be modified in app. Using a client attestation service effectively removes this attack vector, restoring privacy and integrity to the connection.

How We Integrated Approov With Cordova