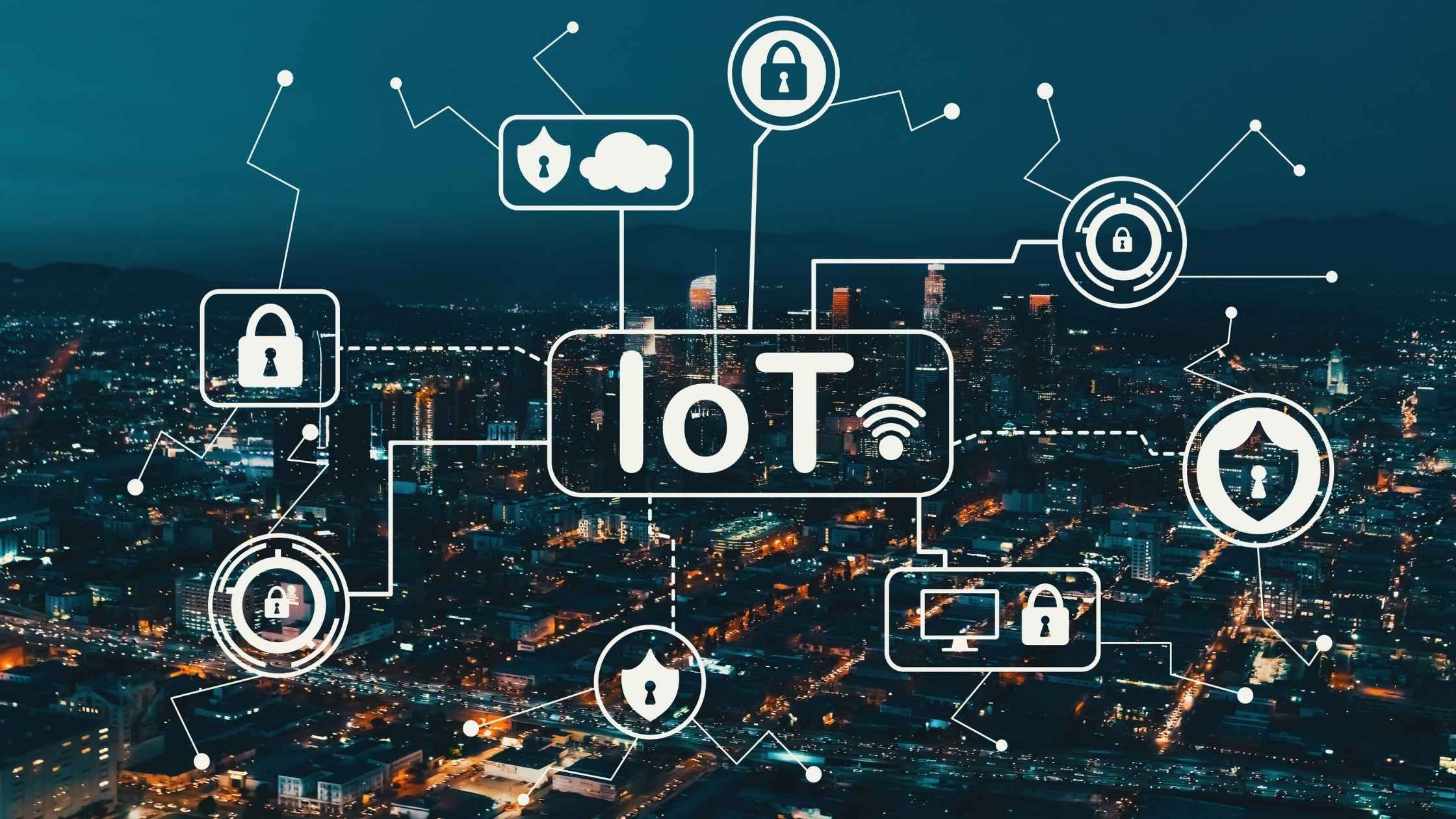 Over the last few years, the OAuth2 open authorization standard has become popular on the web. Companies such as Google, Facebook, Microsoft, and Twitter enable their users to securely delegate access by clients to server resources without sharing their user credentials with those clients. Partly because of this success, OAuth2 is being adapted to help secure access to IoT devices.

Internet of things use cases involve both human and machine clients connected to devices of varying capabilities. One case might involve a user locating, unlocking, and starting his automobile using a mobile phone, while another might involve tracking and optimizing the ripening and shipment of bananas from their picking in Costa Rica to their delivery in Germany.

With constrained devices and networks, it is a challenge to implement RESTful-like APIs within IoT devices. Add to this the immediate need for successful IoT API security standards, and it is imperative to build on battle hardened and interoperable standards such as OAuth2 to operate successfully over a broad range of IoT architectures and scenarios.

The authorization grant flow, described in Mobile API Security, is the most common starting point for OAuth implementations on the web: 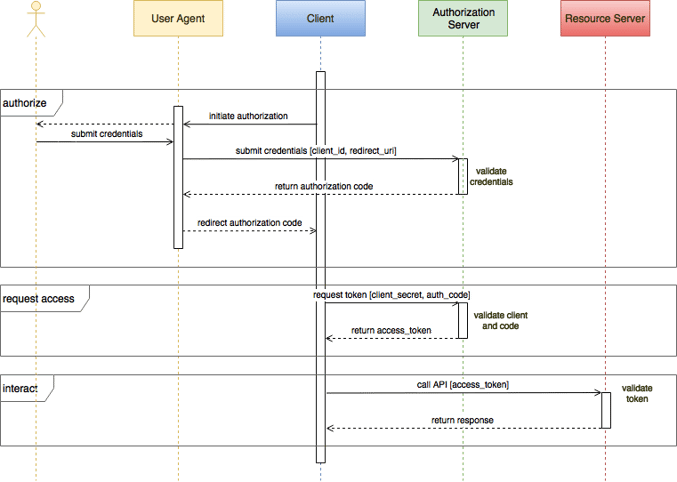 Whoever possesses the access token can use it to access the authorized resources, so it is important that this token be kept secure. For that reason, OAuth2 mandates TLS to keep the communications channel secure.

IoT devices may not have all the capabilities to support a regular authorization grant protocol, but it is a good place to start. Approaches such as Google Weave and IBM BlueMix have begun utilizing OAuth2 protocols in their IoT environments. IETF has a working group for Authentication and Authorization for Constrained Environments (ACE) which uses OAUth2 as one of its building blocks,

The first scenario is a variation of a scenario detailed in RFC7744:

Alice and Bob have invited Alice's parents over for dinner, but are stuck in traffic and cannot arrive in time; whereas Alice's parents are using the subway and will arrive punctually. Alice calls her parents and offers to let them in remotely, so they can make themselves comfortable while waiting. Then, Alice sets temporary permissions that allow them to open the door and shut down the alarm. She wants these permissions to be only valid for the evening since she does not like it if her parents are able to enter the house as they see fit. 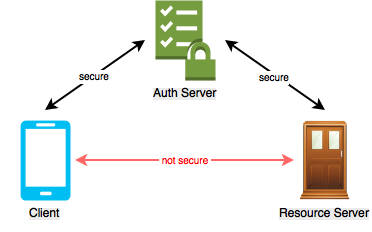 In this case, the path between client and resource server is not secure, so any access tokens sent across this channel could be stolen. A modification to the normal OAuth2 flow must be made to dynamically secure the channel by alternate means. 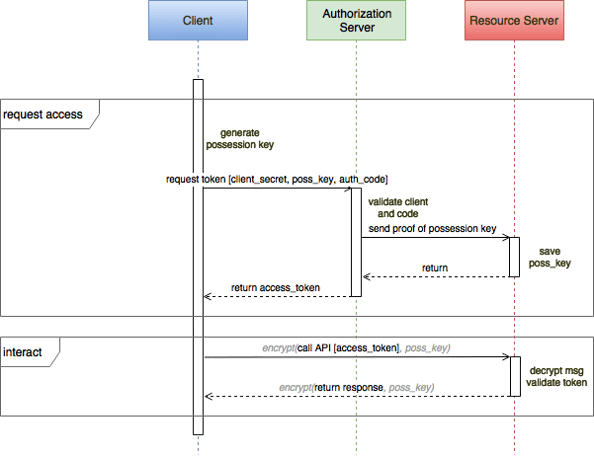 To secure the phone to door lock channel, the client app generates a random key value which will be used later to demonstrate proof of possession of the access token. The app sends its client id, secret, authorization code, and possession key back to the authorization server.

The authorization server returns an access token to the client app and also send the possession key to the door lock using it's pre-provisioned security channel. As a result Alice's mother's client app and the door lock share a secret, the poss key, which they can use to sign and/or encrypt all following communication between app and door lock. In this way, the access token cannot be used without knowing the shared key. Depending on policy, after the door is unlocked, the possession key could be discarded to prevent repeated use of the access token

Not All Secrets Considered Equal

In requesting the access token, the door lock app sends the auth code with two secrets, the client secret and the possession key. The possession key is dynamically generated, can be held in memory, and is relatively unique and short-lived, so it can be considered quite secure. The client secret is a static value within the app, and cannot be considered very secure. If an attacker reverse engineers this value, it could construct a fake app which looks genuine and, holding a valid client secret, appears perfectly authentic to the OAuth2 authorization grant flow. There are plenty of these apps causing mischief in the app stores, and if Alice's mother has been tricked into using the fake app, it can generate a possession key, grab the access token, and secure the door lock channel for its own malicious use. 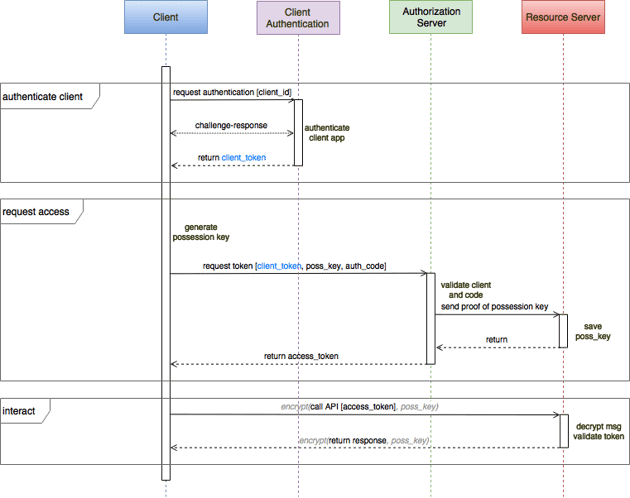 A dynamic attestation service, such as Approov, provides extremely reliable positive authentication of untampered apps. Being dynamic, this service authenticates the app during both phases of the authorization grant flow as well as frequently during authorized operation. As a result, every authorized API call is made by an authentic app for an authorized user.

In the second scenario, Alice has a personal medical device to monitor certain health parameters. The device is low power and communicates with Alice's phone using older bluetooth with very limited security. 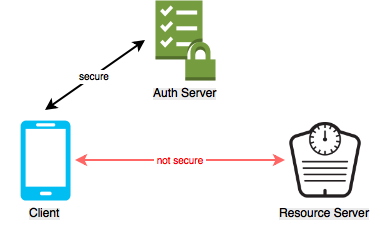 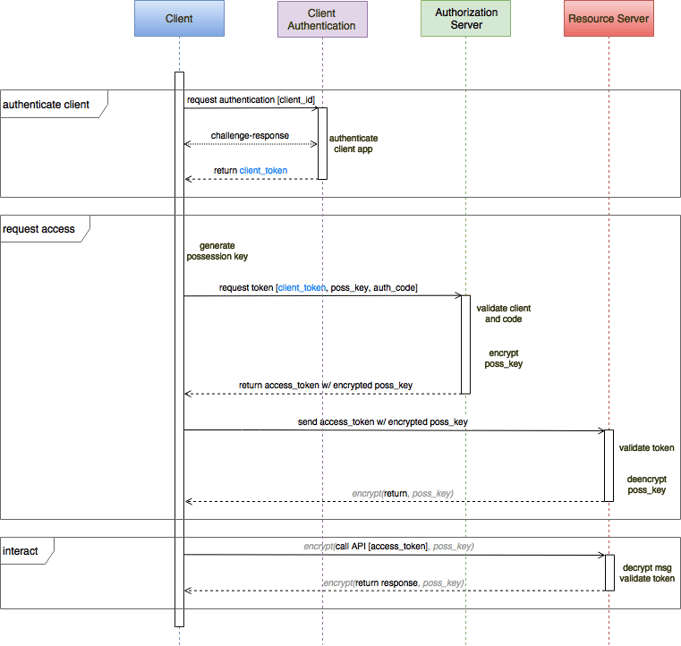 This time, however, the authorization server uses one pre-provisioned key pair to encrypt the possession key and adds it to the access token claims as a confirmation claim. The access token is signed by the same or a second key pair. When the medical device receives the access code, it verifies the signature, checks the claims, and decrypts the key. If everything checks out, the device uses the now shared possession key to secure communication with the phone app.

As with the previous scenario, the access code grant is still using a less than secure static secret within the phone app, and just as before, this should be hardened using the same attestation service upgrade.

With such a wide range of usage scenarios with a broad variation in device and network capabilities, it is important to build a consistent set of security protocols which can be mixed and matched as needed. OAuth2 authorization flows are a well established place to start. Many vendors are extending from OAuth2 to reach their security objectives, and the IETF ACE working group is developing open standards covering a broad range of IoT use cases.

Improving security by hardening the weakest links is always important, so strengthening client authenticity by replacing static secrets with attestation services is useful in almost all IoT use cases.

The Mirai attack from October 2016 sent us a stern warning. Establishing consensus on a standard set of security profiles which cover the broad range of IoT use cases is a key next step towards strengthening interoperable security between IoT resources.

OAuth2, often combined with OpenID-Connect, is a popular authorization framework that enables...